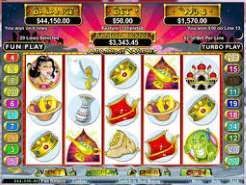 Play Now
Tallied by the number of spins in October, RTG’s five hottest slot games have been announced. In October, these five games were drawing the most action. Here’s everything you need to know about these favorite slot games from RTG.

Head into the days of Caesar with Caesar’s Empire Slots . Betting starts at a penny per pay line, so you don’t have to wager a lot. Win the bonus feature when you get both Caesar and the Roman Coliseum on the reels. Each Caesar coin symbol that appears during the awarded free spins adds between one or five additional free games. Caesar also triples your winnings, so if he pairs with Cleopatra to create a pay line of five matching symbols, you’ll win 7,500 credits!

It’s cops against robbers in Cash Bandits Slots . Bets start at a penny per pay line, and there are 25 lines in all. The feature occurs when you get at least three of the Cops and Robbers symbols and involves picking the lock on four vaults. You automatically win five free spins and a 2x multiplier, but cracking a vault increases those numbers.

Let the Count pile on the prizes in Count Spectacular Slots . Two progressive jackpots provide some of the reason so many players choose this game, but the expanding Count wild is equally appealing. Plus, the count is worth as much as 10,000 credits. When Count Spectacular lands on the first and fifth reel at the same time, choose between a dozen free spins and a 3x multiplier or four re-spins with the wilds in place. Betting starts at as little as 25 cents with all pay lines activated.

Creepy sounds and multiple bonus features make Witch’s Brew a very popular slot game. The witch wild doubles your winnings, but that’s just the start of the fun. Both the witch wild and a secondary wild (dragon fang) trigger free spins when they appear on the second, third, and fourth reels. The Goblin Blood scatter also triggers 10, 25, or 125 free spins with doubled winnings and grouped wilds during the free rounds. Bet as little as a penny per line on this 25-payline slot. Find these five popular video slots at RTG casinos . Be sure to check the promotions before making a deposit to play and win.
Play Now