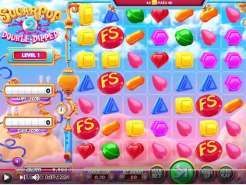 Play Now
ICE 2018 was abuzz with many exciting new titles to be released, the unveiling of new development teams and unexpected surprises; the biggest was created by top developer Betsoft and its newest title Sugar Pop 2: Double Dipped Slots . Many in the industry have been waiting with baited breath to get a glimpse at the follow up to the developer's highly successful Sugar Casino Pop Slots and Betsoft did not disappoint. What was surprising was it was not the only excitement that the developer brought to the convention floor as the team also caused a stir with the announcement of a game-changing title to be released later this year.

A Leader In Online Gaming Technology

Betsoft has been a long-time innovator in online slot play and is credited with bringing true cinematic style gaming to the internet; the developer's games have equaled or surpassed the quality of some console video game titles and animated feature films. Betsoft has created over 190 slot games, including its highly acclaimed Slot3™ series that the developer has converted to the company's ToGo™ collection, giving mobile players a quality choice of games.

The sneak peek at Sugar Pop 2: Double Dipped did not disappoint, as the bonus content in the game was even more substantial than many had hoped. Not only does the title feature wilds and a free spins feature, it also has numerous power-up symbols that give bettors even more ways to score a big payday the longer they spin the reels of the title. The biggest surprise at the Betsoft display was the announcement of a new innovation that the company plans to release later this year. While no specifics were mentioned, Betsoft announced that this "evolutionary gaming technology" would change the gaming world and bring in a whole new demographic to online slot play.

The developer had more than future games, as they prominently displayed their most recent release, Legend of the Nile Slots ; the slot boasts not only the quality 3D graphics that the developer is known for, but it also prominently showcased Betsoft's newest innovation, the "trail system" that is now a part of the SHIFT platform used by the company to produce its high-res titles. The trail system rewards players for spinning the reels over a period of time, giving players the incentive to play the title for longer periods of time.

Betsoft Is Still King Of The Mountain

Many consider Betsoft the king of online slot titles and it is easy to understand why when you look at the developer's most recent releases. With Legend of the Nile, Betsoft turned what could have been just another Egyptian-themed title into a successful and innovating slot. Many in the industry are looking forward to the release of Candy Pop 2: Double Dipped and many are also holding their breath in anticipation of the revolutionary game that Betsoft has announced for later in the year. Whatever that is will more than likely be impressive as Betsoft is a company that rarely fails to make an impression when that is what they have set out to do and players are the winners when they succeed.
Play Now