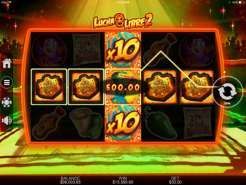 Play Now
Fans of developer RTG and the developer's slot hit Lucha Libre Slots will have much to celebrate this Cinco de Mayo with the release of the follow-up Luche Libre 2 Slots that will be released in time for the traditional Mexican holiday. Lucha Libre 2 will feature the same excitement as the original with the inclusion of two bonus games that provide exciting ways for players to win on this much-anticipated release. The new slot title will provide players a fun spin and a possible big payday.

Two Bonus Games Bring The Excitement To This New Title

The newest RTG slot brings with it two new bonus games; the Time to Rumble feature and the Fists of Fury feature add new and inventive gameplay to the new title. The Time to Rumble bonus is triggered when three or more Mucho Mayhem symbols appear anywhere on the reels and players are given the opportunity to choose a wrestling move to be used on an opponent that chooses the number of free spins that will be awarded. The Fists of Fury bonus randomly awards respins before or after the Time to Rumble Feature, giving players even more chances to hit a winning combination on the reels. Lucha Libre 2 also features a stacked wild symbol that can award a multiplier of up to 10X.

Bright Colors And Cartoon Animation Make This A Fun Spin

A Much Anticipated Release And More To Come

While the excitement for the release of this title is immense, players can also look forward to two Chinese themed slots that are being released by RTG following this slot title; San Guo Zheng Ba Slots and Tian Di Yuan Su Slots are scheduled for release after Lucha Libre 2 and should bring more enjoyment and excitement to RTG casinos when they are released. Until then, remember to celebrate Cinco de Mayo with the new RTG release Lucha Libre Slots.
Play Now