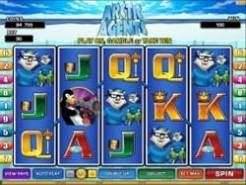 Play Now
Players looking for new titles to spin in the month of March may want to take a look at three slots that have been added at casinos in recent weeks and qualify for bonuses that are being awarded for playing these games. One of the promotions offers double points at the casino, while two others are offering bettors who play the games a chance at receiving an extra €100 in their bankroll through a drawing for those who played the games during the allotted times. All three promotions give punters a to play these three slot titles that hold a large amount of potential for a big win.

What a Hoot Slots is a 5-reel, 9-payline title by developer Microgaming and is a brightly colored title that depicts a fun get together of a group of woodland owls in the middle of the night. The scatter in What A Hoot does not give free spins but instead is a paying scatter. Three scatter symbols pay 5X the total credits wagered, four symbols give a 10X return on the wager and five of the scatter symbols awards 50X the initial credits wagered. Players who play What A Hoot Slots may be eligible for the €100 prize drawing; 10 lucky random winners will receive the €100 each day of the promotion

Emoticoins another title by developer from Microgaming, is a 30-payline slot that hosts multiple bonus features. Wild Blast can trigger on any spin of the reels and adds up to five wilds to the board randomly, giving players a second chance at payline wins. The scatter is triggered by an LOL symbol and bettors are awarded 10 free spins; during these spins, any wilds that appear on the reels during the free games is frozen in place until the free spin round has concluded. Emoticoin will also allow punters a chance to win one of 10 €100 prizes offered in this promotion.

Deco Diamond Slots is part of a different promotion that will award double player points for the duration of the promotion that finishes at the end of March. Deco Diamond is a 5-reel, 9-payline game that has an unusual bonus feature. When triggered, the Wheel of Fortune bonus round gives players a chance to spin the bonus wheel up to three times, giving bettors a chance at a multiplier that has the ability to turn a small or medium-sized win into a very big payday.

Promotions Are For the Month of March

These promotions are a great way for players to play a new game and possibly score some extra bankroll in addition to any big wins they may hit; all three games are well made and offer a high entertainment level Bettors should look for other promotions when using the promotions in this article , as some casinos are possess generous promotion departments that can extend any players bankroll and what player doesn't want that?
Play Now