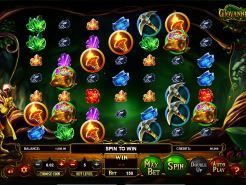 Play Now
There are some slots that are so intricately, stunningly designed that it is hard to distinguish them from the images that regularly cross your television screen, and Giovanni’s Gems may just be the best one yet. Offering great features like free spins, Giovanni’s diamonds, cluster wins and exploding wins, this game is set to delight gamblers around the world.

There are a great deal of features that make Giovanni’s Gems one of the most incredible games that this review has seen in a long time, but perhaps the most intriguing feature is the fact that anytime a symbol depicting coal appears next to an adjacent, winning cluster, it turns the coal into diamonds; this is hugely significant in terms of winning potential because diamonds do not have to be next to one another to win. Giovanni’s Gems also have cluster wins, which is becoming a common way to break free from the traditional payline structure that slot players typically encounter. Whenever five matching symbols are touching, in any direction, it counts as a paying win. This simply means that the left-to-right concept of play can be forgotten for the duration of a Giovanni’s Gems gaming session. Similarly, the game also offers exploding wins; anytime a cluster win is achieved, players will see those winning symbols explode and be replaced with new symbols. Similar to a match-three game, this generates opportunities to win during any paid spin. Finally, the graphics in Giovanni’s Gems deserve special mention; the fantastic attention to detail, deep, vivid colors and careful design of the screen in which the reels are set is simply unreal. It is quite difficult to achieve such graphical mastery in a slot game, but Giovanni’s Gems fits the bill.

Players will triggering the free spins bonus round anytime they find themselves with at least 5 Giovanni symbols anywhere on the reels; during the feature, the low-paying coal symbols turn into the highest-paying diamond symbols. Of course, the wins still explode, giving Giovanni’s Gems free games far more payout potential than those games that do not offer this exciting feature.

Online casino gamblers with a love of Betsoft titles will be pleased to learn that it was the developer who created all of the awesomeness gracing the reels in Giovanni’s Gems. From exploding, clustering pays to the fact that the game is a virtually unheard of 7X7 grid, Betsoft has again designed a title that will keep players running back to the reels time and again.
Play Now