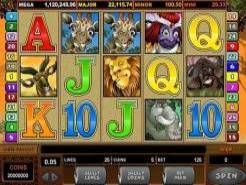 Play Now
The mobile version of the progressive slot Mega Moolah has become the reason for another triumphant online gambling win. A lucky player has taken home the life-changing sum of 8, 0123, 153.35 million euros. The sum was acquired by a Tipico Gambler on Tuesday, the 25th of April, 2017 on a normal mobile device. That is happening just one month after the hitting of another major jackpot that was worth 6.6 million euro. This new 8 million jackpot is currently the biggest jackpot win in mobile online gambling history overtaking the record being held by Microgaming from August, 2016 that amounted to 7, 968, 311.26 Euros. A useful inside tip for any inspired gambler, by the way is the fact that when such a sum is own it will be granted as one big sum and not in annual installments or anything like that. Tipico’s Chief Commercial Officer Marlon van der Goes has gone on record by saying that he is very happy that such huge fortune has bestowed one of their players. Apparently, the stake with which the win has been won was just 6.25 Euro. David Reynolds, who is a games publisher at Microgaming has pointed out the amazing jump from 4.3 million to 8 million within the time span of just over a month and congratulated the Tipico player. Microgaming, which is the biggest progressive jackpot network in its business, has delivered more than 716 million. The game itself, Mega Moolah has a very distinct animal kingdom African atmosphere, featuring wonderfully drawn animals for symbols with characteristically emotive faces, most of them happy, just like that 8-million-euro winner. The animation is top-notch, a trademark for Microgaming’s masterful touch. It has 5 reels, 25 paylines, a progressive jackpot (the one that has been won) and 2 bonus games. One of them is the free spins game that gets activated through the wild lion symbol, granting 15 free spins and it can be restarted. The other one can be activated randomly and gives you the chance to win one out of 4 Jackpot prizes, including the now infamous Mega Jackpot. Test your luck with Tipico Casino and Mega Moolah as soon as you can. Life-changing “miracles” are quite possible and that is the latest proof and as you can see, it is not that rare of an occurrence at all so keep your hopes high and your passion for gambling will lead you to the ultimate success.
Play Now