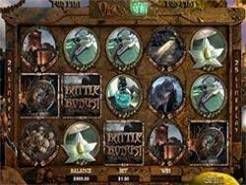 Play Now
It’s taken RTG a while, but maybe that’s simply because they were perfecting the graphics, the gameplay and the whole superb package that is Orc Vs Elf, their first ever 3D online slot! Hold on and don’t get too excited just yet as this is news that this slot will be released next month and we’ve been given a sneak preview. Orc Vs Elf is a 3D masterpiece, it really is a game changer as far as 3D graphics are concerned and RTG have done a brilliant job in creating what will no doubt be such a popular slot. Putting the graphics to one side for a second, there is also 14 features, a brand new Superspin feature and a widescreen display that means that many US slots fans will be simply blown away.

As you may be able to guess from the title Orc Vs Elf is an adventure styled slots set in middle earth where the Elves and the Orcs are in battle for domination. There are 2 different paths that the player may take, The Road to Elveros and The Trail to Orcholme and both lead the different characters to their respective mainland, and there’s plenty of action along the way. The bespoke icons you see on the reels will depend on which path you choose, and you’ll also be able to choose your fighting champion too! There are so many features to Orc Vs Elf and again, they depend on which character you choose at the beginning of the game, we have a feeling players will return time and time again, changing characters and paths to find out which they prefer and of course which provides them with the most wins. Each path or trail that you choose offers a staggering 7 features, that’s 14 in total for you to discover and when these features are triggered you get the choice to accept it or continue along your path. It’s a little like a magical mystical role playing adventure slots, it is just so cool. The aim is to get to the Battle Bonus, and the character you have chosen will fight your corner, and when it’s all done, you collect your cash prizes that you’ve gained from the special features and the battle itself and start all over again by choosing either Orc or Elf. It really is a marvelous piece of work and RTG have really outdone themselves this time around, and we are positive the one word that springs to mind when you see Orc Vs Elf is....WOW!
Play Now