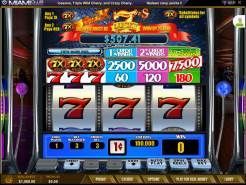 Play Now
Developer WGS is excited to announce the release of the first game in its Wild X Slot Series, 7x Lucky 7s Slots , at Lincoln Casino . 7X Lucky Sevens is the first in a series of 3-reel slot games that create the feeling of an early Las Vegas slot machine with the added bonus content that today’s player craves.

7X Lucky Sevens has the ability to award large multipliers that can lead to huge payouts at anytime during the game. A single wild in the payline awards a 7X multiplier, while two wild multipliers can give the gambler a multiplier of 49X; this fantastic multiplier is the perfect example of what WGS is trying to create with the Wild X Series .Players who enjoy the thrills of seeing multipliers appear in their slot games will return to 7X Lucky Sevens again and again.

Multipliers Plus a Progressive Jackpot

In regard to the progressive jackpot, Lincoln Casino manager, Ryan Wilson, stated that “It’s only been in the casino a few days...and the jackpot has already paid out at least once”. The new WGS game has also placed itself in the firmly in the top five games played at the casino. 7X Lucky Sevens contains a double or nothing feature for slot players who prefer to take their gaming a bit closer to the edge in hopes of scoring a massive prize.

Longevity is Probable with the Wild X Series

Some developers are trying to focus on a series of slot games with similar themes that players enjoy, and WGS may have a winner on their hands with this 3-reel saga. While 3-reel slot titles are certainly not threatening to take over as the frontrunner for those who like to spin the reels, they do seem to be enjoying a renaissance of sorts as younger players are discovering them; also increasing the amount of action 3-reel games are seeing among young casino enthusiasts is the fact that many of the newest titles, like 7X Lucky Sevens, come with the added enjoyment of wilds, multipliers and other modern game extras. The exciting reaction of players to the release of 7X Lucky Sevens at Lincoln Casino is a sure sign that developer WGS made a wise decision when its team chose to create a series of games around the classic, 3-reel slot concept.
Play Now