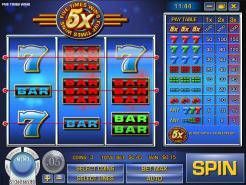 Play Now
This is not a game with five reels and a chance to win five times but a game with three reels and three paylines. Players will be amazed by the huge chances that they are given in this exciting and fast paced slots game that is accompanied by great jazz music. Players can enjoy this game with a single coin bet, a two coin bet or a three coin bet. It is up to the player to decide and the coin sizes range from $0.25 up to $2.00 but of course the three coin bet is by far the best option giving the player a chance for the highest payouts.

The 5x symbol is the highest paying symbol when appearing on one of the three paylines. Five of these with a three coin bet on the third payline award players 5000 coins, four of these with a three coin bet award players 3000 coins and with a single coin bet players receive 1500 coins. The 5x when appearing on a payline on its own acts as a multiplier, of course of 5x the amount of the payline that it contributes to, i.e. it is a wild symbol. Two of these on a payline give players 10x the amount. Apart from the important 5x symbol, other symbols in this slots game include a red 7, a green 7, a blue 7, three bars, two bars and a single bar together with the all-important bunch of cherries. This game may look basic at first glance but as soon as the player tries it out he will realize that there is a lot more to the game that he at first thought with some huge payouts for the player.
Play Now