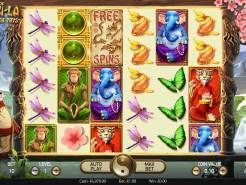 Play Now
The ethereal, mystical world of Shangri-La has come alive on the reels in The Legend of Shangri-La: Cluster Pay Slots. In addition to offering a unique twist on the game’s theme, the concept of cluster pay is one that many online casino gamblers have come to adore; rather than requiring players to line up specific symbols on a predetermined payline, gamers may instead look forward to cashing in on wins generated whenever nine symbols are adjacent anywhere on the screen.

Players who are looking forward to some of the exciting jackpots available in The Legend of Shangri-La: Cluster Pay Slots will be pleased to learn that the game features 10 bet levels and a wide array of coin sizes. In fact, the title offers such flexible wagering that it has already proven to be a favorite of both budget slot players and high-rollers. Most importantly, gamblers must remember that they can’t win if they don’t bet.

Unrivaled Graphics on the Reels

The Legend of Shangri-La is one that speaks of a mythical paradise filled with an unparralled beauty, and the game’s developer did a fairly good job creating this representation. Icons include incredibly detailed, Asian-themed graphics; players will also find an elephant, a lynx and a monkey that are presented as symbols that cover multiple reel spots to create clustered payouts more rapidly than their counterparts. Players won’t see conventional wild symbols on the reels in this game, but they will find question mark icons that will become whatever icon will provide the biggest win.

While The Legend of Shangri-La: Cluster Pay Slots does not boast an interactive bonus round, there are a couple of special features that make the game somewhat more interesting than the typical casino fare.

Spin for Fun and Cash Today

Online slot enthusiasts will be pleased with the fact that they can first try The Legend of Shangri-La: Cluster Pay Slots for free before they begin wagering real cash. Get started today for your chance to spin the reels, collect free spins and win in this fantastic title.
Play Now

Where to Play The Legend of Shangri-La: Cluster Pays Slots