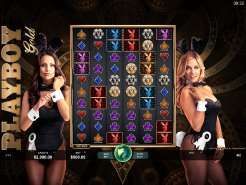 Play Now
While female players may be tempted to immediately dismiss Playboy Gold Jackpots Slots as a game for men, the title has something to offer virtually every gambler who chooses to spin the reels. While the theme and symbols in the game are geared more toward males, the fact that the title also offers colossal symbols, a bonus wheel, free spins, multipliers and four jackpots will be enough to encourage every player to check out this upcoming release from Microgaming.

Getting to Know Microgaming

Featuring a massive portfolio and releasing new games on a monthly basis, Microgaming literally has something to offer every casino enthusiast out there. The responsible, community-minded company has been in business since 1994, which makes it the oldest developer in the online gaming industry, and gamblers will be excited to learn that Microgaming features the largest progressive jackpot network in the world. Whether bettors are new to online slot play or they’ve been at it for nearly as long as Microgaming, they’re sure to enjoy what the developer creates.

One of the best things about Microgaming and the casinos that it powers is that gamblers can look forward to playing a demo version of the game; this fantastic option is an excellent way for users to ensure that they’re going to enjoy a slot before they begin spending money on it. Typically available as a trial version on third-party websites and at some casinos, playing the demo is one great way to become acquainted with any game.

A Popular Theme and a Well-Designed Game

Nearly every online casino gambler has heard the phrase, “sex sells,” and that is certainly the case in Playboy Gold Jackpot Slots. While rather tasteful by today’s standards, the fact that the game is marked as a product of Playboy suggests that Microgaming is quite aware of the fact that attractive women hold a great deal of appeal for some users. The simple, uncluttered design of the game makes the title an improvement over certainly other new releases, and the Playboy Bunnies on the reels are clearly modeled after real women. The ladies on the reels of the game include Stephanie, Gia, Hiromi and Carly; the rest of the regular symbol set is simple, including just playing card symbols Clubs, Hearts, Spades and Diamonds. Playboy Gold Jackpots also includes several wild multiplier symbols in addition to the parts of the Bonus Wheel, which may be used to trigger one of several different events in the game.

Because some players prefer to stick to classic slots while others like their games to include every feature known to the industry, it’s important to understand exactly what makes any individual slot tick. In the case of Playboy Gold Jackpots Slots, gamblers will find that it is a 5-reel video slot with multiple bonus rounds and 30 paylines.

Placing Bets and Reading the Paytable

Although some online casino gamers will stick with playing the demo version of Playboy Gold Jackpots Slots, others will want to wager real money on the title for their chance to score major wins on the reels and in the bonus features. Coin sizes in the game range from $0.01 to $0.20; players may place up to 10 coins on each of the 30 paylines. The maximum bet in Playboy Gold Jackpots is $60, although real money play can occur for as little as $0.30 per spin.

Bonus Content is one of the first things that online casino gamblers look for when they’re in search of a new slot, and Playboy Gold Jackpots won’t disappoint in this regard. Offering colossal symbols, wild multipliers and the wheel bonus, which incidentally, could result in free spins, this game is almost bursting with great bonus potential.

The RTP and Game Rating

The return-to-player, more commonly known as the RTP describes the amount of money a slot pays back out of every $100 wagered overall; players should keep in mind that this number is an average of all bets placed anywhere and in no way indicates that they will receive a specific amount of cash in winnings when they spin the reels. While the popularity rating of Playboy Gold Jackpots is currently reported as one out of ten, the theme and bonus features suggest that the game’s rating will increase significantly once it has been released for play.

Wager and Win or Play for Free

As is the case with every slot online casino gamblers will find at their favorite gaming establishment, Playboy Gold Jackpots is available for real money betting. However, many casinos will also make the title available for free or “practice” play; this is an exceptional way for gamblers to get in on the gaming action without having to spend real money. Check out the free play potential at one of the many quality Microgaming-powered casinos to find out more.

A large percentage of today’s newly released slot games offer players the option of spinning the reels on their Android or iOS smartphone or tablet, and this holds true for Playboy Gold Jackpots. Regardless of when players choose to game, they can look forward to doing it anywhere a reliable internet connection is available when they go mobile. Don’t miss out on the incredible entertainment in Playboy Gold Jackpots Slots.
Play Now