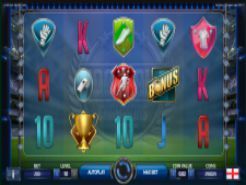 Play Now
Football: Champions Cup Slots is a 5-reel, 20-payline slot by developer NetEnt; the title also boasts a free spins scatter, a shootout bonus game and multiple wilds that have their own unique properties. The developers at NetEnt are well-known for slot titles stuffed with bonus content; Football: Champions Cup does not disappoint in this regard with several different ways of scoring a massive payday on the reels.

NetEnt released Football: Champions Cup to celebrate the 2016 European Championship and features a clean look and an easy-to-use betting interface. Bettors will find footballs, football shirts, football players and whistles on the reels of this game along with the playing card symbols ten to Ace. The scatter symbol is a gold cup statue and the bonus symbol says bonus with the O replaced with a football.The golden wild symbol and the overlay wild can replace any of the aforementioned symbols except the scatter and bonus symbols. Slot spinners will also find red and blue wilds in the bonus features.

With a maximum bet of $100, Football: Champions Cup Slots could go unseen by those who prefer to make large wagers but the title features multiple bonus features and a whopping four different wilds that can give any player a big payday. Coin sizes range from $0.01 on up to $0.50 and up to 10 coins can be wagered on each payline. Penny players can join the fun with only a minimum wager of $0.20 to play all of the game’s paylines.

He Shoots! He Scores!

Football: Champions Cup has a scatter feature that resembles a knockout stages of a football tournament; players can spin their way through the round of 16, the quarterfinals, the semifinals and the final while collecting winnings along the way. A win in the finals will give a bettor a cash prize in addition to any other winnings. The bonus game resembles a shoot-out where the player must choose a spot in net to score and choose a spot to defend for each of the five rounds of the shootout to earn cash prizes.

The Thrill of the Win

Football: Champions Cup can make a great replacement for when there are no matches or cups to watch, as the game brings a level of excitement that few can with the long list of bonus features that this title can boast. A scatter round, a bonus game and two different wilds on the regular reels give this slot an enormous amount of potential for a very large payday with an unlimited amount of excitement.
Play Now