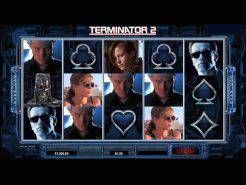 Play Now
The online casino games and slots development company Microgaming are all set to launch their next blockbuster branded online slot with Terminator 2 Slots set to hit Microgaming casinos very soon, and it looks superb. The slot will be released this summer in a deal with Studiocanal and the fantastic characters from the film will all be on the 5 reels. The slot will take the full name of the film, Terminator 2 Judgement Day and will feature the Microgaming feature of 243 ways to win, which during freespins mode expands to a cool 1,024 ways to win, and those freespins are triggered by the time travelling orb symbol. The iconic Terminators of the T800 and the T1000 are both central figures to the slot and, just like the film, the visual effects are simply amazing. The film itself is ranked up there with some of the best, and of course one of the most popular sci-fi films of all time and we have a feeling that the online slot may be pretty popular too, if the trailer is anything to go by! Just like the film, the slot provides a dark and metallic feel with breathtaking graphics and animations that will blow you away and Roger Raatgever of Microgaming states that, "We are incredibly excited to be developing an online slot around the Terminator 2 movie, it is a brand which has mass appeal and lends itself perfectly to the world of online gaming. As explosive as the film, we are in the process of creating an action-packed, jaw-dropping slot; it's a classic in the making!" Sounds like it’s going to provide more than enough gaming thrills and we can also expect a little bit of a fanfare when it arrives, with Microgaming casinos rolling out some very nice Terminator promotions to show off their new offering.
Play Now