Miles Bellhouse and the Gears of Time Slots 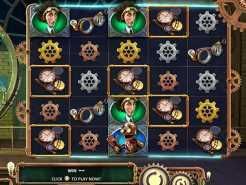 While experienced online casino gamblers are already familiar with Betsoft’s exceptional games, few know that the company’s early days were less than successful. However, the advent of game-changing technology made it possible for the provider to begin producing more slots with vastly improved graphics, better bonus features, and mobile access, although that took a bit longer. Once Betsoft hit its proverbial stride, the company, the casinos it powers, and the players it entertains all began to benefit from its excellence. Since then, Betsoft has enjoyed increasingly higher levels of success, creating countless games that delight players across the globe.

Although Miles Bellhouse and the Gears of Time has not yet reached its official release date, the demo is available on the Betsoft website. Offering gamblers the chance to check out the slot and everything it has to offer, users will love this opportunity to familiarize themselves with the game, including its free spins, respins, and unique features that occur in the past, present, and future. Join Miles Bellhouse as he takes adventures in multiple eras.

Created around a theme that blurs the lines between invention, sci-fi, and steampunk, Gears of Time appeals to an extremely varied audience. While the game’s theme initially seems achromatic, players will quickly learn that it’s far more organized than it appears; after all, the disarray of time travel could leave anyone’s head spinning. Players will see the reels set below the green, spinning portal to another place in time, and the 5x5 game grid is dark and appealing. The symbols in the game include icons depicting a seemingly friendly robot, Miles Bellhouse, his time machine, and gears in silver, gold, and copper, among others. The slot's wild symbol is a blazing ball of energy, and it can replace every other icon in the game.

Getting to Know the Game Setup

Miles Bellhouse and the Gears of Time is a 5-reel video slot with bonus rounds and just five paylines. While it seems somewhat strange that such an in-depth game offers so few paylines, wins are determined using a system called “cluster pays.” The game calculates wins by counting the number of identical icons adjacent to one another in a left-to-right arrangement.

Placing Bets and Reading the Paytable

Coin sizes in Miles Bellhouse and the Gears of Time range from an affordable $0.01 to $1.00 per payline, which makes the largest wager possible a very reasonable $5.00. While the slot is decidedly not for high rollers, users who want to aim for the top prizes in the game can do so without exceeding their entertainment budget. Accessing the paytable in Gears of Time is quick and easy as players simply need to open the menu of game settings and click or tap on the lowercase “i” to open the paytable. Players will find information on payline wins, bonus features, and game rules when they read the paytable for the slot.

Miles Bellhouse and the Gears of Time has quite a bit of bonus potential, and players will quickly learn that the game occurs in the past, present, and future tenses. From triggering the features to landing big prizes in the free spins round, gamblers will be pleased to see a game with so much depth.

Impending Popularity and the RTP

While it’s too early to determine the popularity of Miles Bellhouse and the Gears of Time, prior success with similar games suggests that this one will quickly become a favorite of players. The RTP, or return-to-player, is a generous 96.98 percent, making the title perfect for users who like the idea of frequent, potentially big wins.

Travel Through Time From Anywhere

Even though actual time travel isn’t likely, players can take their time-travel adventures with Miles Bellhouse anywhere they want to go using a mobile device. Bettors can access the game on multiple platforms, including both iOS and Android. While sliding into the past isn’t a possibility today, users won’t want to miss their chance to play this great game from anywhere with a reliable connection to the internet.

Get Ready to Spin the Reels for Fun or Cash

While Miles Bellhouse and the Gears of Time is not yet available in casinos, gamblers can look forward to spinning the reels within the next few weeks. And because Betsoft values player satisfaction, gamblers can get in on the fun for free or wager real money in the game. Either way, Miles Bellhouse and the Gears of Time Slots will keep players’ eyes on their screens. Don’t miss your chance to spin the reels.
Play Now

Miles Bellhouse and the Gears of Time Slots News

Where to Play Miles Bellhouse and the Gears of Time Slots